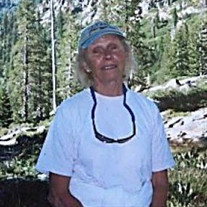 Sunday morning on her beloved Truckee River at the break of dawn, Barbara passed peacefully to the next life surrounded by her four loving children, nephew and friends. Her incredible spirit and zest for life were with her until the end of her time on this earth. She will be remembered for her sense of humor, tenacity, positive attitude and heart-felt commitment to her children, husband and friends. She was a go-for-it kind of gal. We celebrate Barbara, our Mother, with the spirit she embraced in life. She chose to live her life with abundance. Full of laughter, song, prayer and love; of family, friends, community and the beautiful natural world. Regardless of where Barbara was, she made fast friends by endearing those around her with her generous ability to join-in and include everybody. Born in Philadelphia, Pa. to Beatrice and Frederick Leiser, in the upstairs of the family bakery, Barbara was raised in the city with her two siblings, Jane and Freddy. She attended schools in Philadelphia. After graduating from West Philadelphia High School she studied at Pierce Business School and finished a two-year degree. Shortly thereafter, she pursued her girlhood dream of international travel and became a TWA flight hostess, working the first Trans-Atlantic flights. She was an international beauty in her uniform. She savored her trips to France, Germany, Ireland, England, even Cuba. She was based out of Kansas City and New York City where she made life-long friendships with TWA roommates. She loved city living going to Broadway shows and music performances. She told hilarious stories of escapades with her wonderful roommates. She eventually met her husband, Dick (Richard) Kudrna on a layover in San Francisco, Calif. and moved west. They were married for 33 years until his death in 1993. The first house they bought together was on the Truckee River. It was a place they would always call home, even though it was a rough cabin and part-time residence. Managing 10-foot snow drifts, raising four small children, installing a flush toilet were victories. Dear friends along the river were like family. Barbara made the transition from stylish city girl to competent alpine woman with ease, laughter and gusto. They began their married life in Lafayette, Calif. and eventually moved to Salinas, Calif. where they started a Main Street retail business, Kudrna’s For Children and were members of a retailer’s group “Baby News.” Together they built and ran a community based business for 25 years, opening an additional store in Monterey, Calif. with their children working in the stores. She was an active member of Sacred Heart Parish and school in Salinas, volunteered at the John Steinbeck House and enthusiastically raised her four children. Barbara moved to the family home on the Truckee River after the death of her husband Dick, fulfilling their dream of living in the mountains year-round. Her passions included skiing, hiking, playing tennis and working in her wildflower garden. She was a volunteer for the North Lake Tahoe Historical Society, the Tahoe Music Festival and an active member of the Tahoe Rim Trail Association and of Corpus Christi Parish, often seen walking her dog to church at Queen of the Snows in Squaw Valley. She lived there independently for 11 years. In her later years, to be near her children she also lived in Hollister,Calif. and Bozeman, Mont. She is survived by her children, Liz Ann Kudrna (Bozeman, MT), John Kudrna (Truckee, CA), Jane Kudrna Arnold (Bozeman, MT) and Christine and spouse Dan Lompa (Hollister, CA); 4 loving grandchildren, Skye and Henry Lompa; Fritz and Swift Arnold. She has many nieces and nephews on East and West coasts, one of which, David Catton, was at her side in death also. She is also survived by a sister Jane Reis (Ocean City, NJ), sister-in-laws Peggy Leiser and beloved Rosemary (Kudrna) Catton. Funeral services will be held at Queen of the Snows, Olympic Valley, Calif. at noon mass on Sunday, Aug. 31, 2014. The family will host a reception to follow at the Kudrna Riverhouse. Please consider a donation to Hospice or the Alzheimer’s Association in lieu of flowers. Or plant some flowers in your yard, take a walk in the woods, go see a Broadway show, host dinner for friends and think of Barb.

Sunday morning on her beloved Truckee River at the break of dawn, Barbara passed peacefully to the next life surrounded by her four loving children, nephew and friends. Her incredible spirit and zest for life were with her until the end of her... View Obituary & Service Information

The family of Barbara Ann Kudrna created this Life Tributes page to make it easy to share your memories.

Sunday morning on her beloved Truckee River at the break of dawn,...