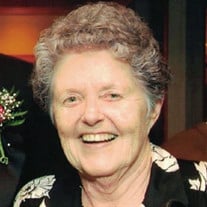 Barbara Ann Smith of Sparks, Nevada, passed away peacefully on May 22, 2018. She was 92. Barbara was born October 19, 1925 in Oroville, California to Margaret and Adelbert Chaffin. She grew up on a ranch north of Oroville with her younger brother, George. Barbara graduated from Oroville High School in 1943, and went on to receive her degree from UC Berkeley in Social Welfare in 1947. She was a member of Alpha Gamma Delta Sorority. In January of 1949, she married Walter James Smith. Barbara and Jim settled in their first apartment in Berkeley before moving to Kensington, California in 1950. In 1964, they moved to El Cerrito, California where they lived until 2013 when they moved to Sparks, Nevada. Together they had three children: Patty, Diane, and David. In the early years of her marriage, Barbara stayed at home to care for their three children. She was active in Girl Scouts with her two daughters. She loved watching her son play Little League baseball and her daughters dance in ballet recitals. She was the instigator of many family summer camping trips taken all over the American west that often included unanticipated adventures. She was a volunteer for various charities in the Bay Area and was a member of the Alpha Gamma Delta Corporation Board in the 1960s. Later, as the children became older, she took up golf. She was an active member of Mira Vista Golf and Country Club and served as Ladies Team Captain in 1978. She continued to enjoy golf and bridge at Mira Vista well into her 80s. She was also an avid reader, her favorite genre being historical fiction. Barbara and Jim loved to travel. They would often take golf vacations to locations in the United States, Canada, and later to Mexico. Then they discovered cruising! In recent years they cruised the Caribbean, the Mediterranean, and the seas of Southeast Asia, Australia and New Zealand, and Northern Europe. It was these trips they enjoyed most in their later years. They also had a vacation home at Donner Lake, California and spent summers there fishing and golfing. Barbara is preceded in death by her husband Jim and her brother George. She is survived by her three children; Patty Engelen and her husband Rich of Reno, Nevada; Diane White and her husband Charlie of Truckee, California; and David Smith and his wife Carla of Rocklin, California. She leaves behind four grandchildren: Michael Engelen of Bristow, Virginia; Christine Engelen of Fort Collins, Colorado; Adam Pressler-Smith of Chandler, Arizona; and Chris White of Truckee, California, and four great-grandchildren. A graveside service will be held on Thursday, May 31 at 1:00 p.m. at the Truckee Cemetery, 10370 Jibboom Street, Truckee, California. In lieu of flowers, please make a contribution in Barbara’s memory to a favorite charity. A reception will follow the service.

Barbara Ann Smith of Sparks, Nevada, passed away peacefully on May 22, 2018. She was 92. Barbara was born October 19, 1925 in Oroville, California to Margaret and Adelbert Chaffin. She grew up on a ranch north of Oroville with her younger brother,... View Obituary & Service Information

The family of Barbara Ann Smith created this Life Tributes page to make it easy to share your memories.

Barbara Ann Smith of Sparks, Nevada, passed away peacefully on...