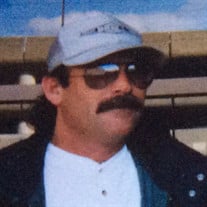 July 28,1957-July 28,2015 Carey Walter Crosbie of Sparks Nevada, Formally of Truckee Calif, Passed away peacefully in the arms of the Love of his life Trina Eisenhour. Carey was one of 4 children Born July 28,1957 to William Aird Crosbie and Caroline Ann Crosbie. Allan of Truckee, Lorrena(Kenneth)Raiger of Twin falls Idaho, Edward(Dena)Crosbie of West Virginia. He had many Nieces and Nephews. That he loved dearly. Carey graduated from Dublin High in 1975, from there he took up the career as an avid Gas Hauler. Which he did for 25 years, the last few years he worked for Flyer Energy, Located on West River St, Truckee,Cal. That is where he was truly in his element. Carey loved his work,and all the men he worked along side. Carey was a Great Fisherman, Entering many competitions on Pyramid Lake, When he was not fishing he spent his time with Trina and his little dog. He loved going down and spending time with her playing poker, and Just Being with her. Carey was proceeded in Death by both his Parents, His Grand Parents and One beautiful Niece. He lovingly called Buzz. He was a Man of great kindness, and a man of His Word. If Carey said he would be there to help you, he always was. He is one man who will be Greatly missed, in so many ways. Visitation will be Tuesday August 4, 2015 from 4:00pm - 7:00pm. A Celebration of Carey’s life will be on August 5, 2015 at 1:00pm. Both will be at Truckee-Tahoe Mortuary, 10126 Church Street, Truckee, CA 96161. Following the Celebration on August 5, 2015 there will be a Private ceremony at the Sierra Mts. Cemetery, Truckee, CA, for Close Friends and Family.

July 28,1957-July 28,2015 Carey Walter Crosbie of Sparks Nevada, Formally of Truckee Calif, Passed away peacefully in the arms of the Love of his life Trina Eisenhour. Carey was one of 4 children Born July 28,1957 to William Aird Crosbie and... View Obituary & Service Information

The family of Mr. Carey Walter Crosbie created this Life Tributes page to make it easy to share your memories.