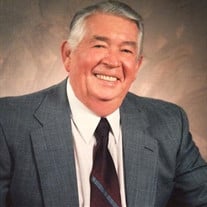 Caswell Dean “Pat” Patterson, long-time former resident of Tahoe City, went to be with his Lord and Savior, Jesus Christ on May 13, 2016. Although we hoped this time would never come, his passing was peaceful, with his daughters by his side at Enloe Hospital in Chico, California. He was blessed to have other family members, friends and pastors come by the day before giving comforting words, hugs, tears and prayers. Long before he was called “Pat”, he was known by Dean or “Little Dean”. He was the eldest son born on June 28, 1932 in Grayson County, Virginia to Dean Patterson and Mary Taylor Patterson. He spent his childhood near Burlington, on the family farm in Alamance County, North Carolina. Besides working on the farm and learning the construction trade alongside his brother, from his Dad, he was the local school bus driver starting at age 15. He was the eldest of five children; Carey Montague, Jess Patterson, Betsy Crisp, and Ann Patterson, who died at age 3. In 1951, upon his graduation from E.M. Holt High School, he joined the US Navy serving as a Bosons Mate aboard the USS Algol, during the Korean War. This was a time in his life that he kept private, unless there was a life lesson to be shared with his children. However, one letter to home made his mom so proud, that she had it published in the Burlington newspaper. He was awarded the National Defense Service Medal, United Nations Service Medal and the Korean Service Medal (two stars). After the military, Pat made his home in Southern California where he continued the family tradition of working in underground construction. Pat moved to Tahoe in 1968; he was the owner of Sub-Terra Construction, Patterson Construction, and partners in TAPCO Construction with Jerry Tippin. These companies did projects in and around the Tahoe Basin and elsewhere for many years. He said he was always so fortunate to have the people who surrounded him both at work and at play as his friends. Pat really truly enjoyed his friends, and even a stranger needing help he would treat as a friend. His friends were his vacation buddies, and he always remained loyal to those friendships. Pat was married and divorced twice, first to Jeri and then to Betty (both who preceded him in death). Five children were blessed enough to claim Pat as their dad; sons, Edward Patterson, and Warren Hoschouer, and daughters, Jody Rasmussen, Cristie Patterson-Akin and Connie Patterson. Pat loved to shoot, fish, swim, play pool, coached football and softball as well as boating on the Lake. He loved sports and encouraged his kid’s involvement in sports. He was integral in the Valley Quarter Midget Association in the San Fernando Valley. He coached Pop Warner football for years in Simi Valley and was President and coach of the Bobby Sox league in the same town. He sponsored both men’s and women’s softball teams in Tahoe City. He taught sportsmanship, respect, and strong “old school” work ethics and fundamentals through coaching and parenting. He jokingly made sure his girls NEVER threw like girls and they knew how to run the bases. The softball field ultimately became our family’s bonding “hangout” for many, many years. After retiring from construction, Pat made his dream come true, traveling North America in his motorcoach. He traveled across the country, visiting family and close friends in Arizona, North Carolina, Florida, Washington and Texas. He also enjoyed the challenge of travelling to Mexico, where the roads are not built for coaches. He finally settled on the coast in Florence, Oregon. He spent the summer and fall in Oregon and winters in California watching his grandchildren grow up in Reno, Tahoe and Richvale. Due to declining health he moved the coach permanently to Richvale in 2013 where he could be closer to family. Pat is survived by his sisters Carey Montague (Burlington, NC) and Betsy Crisp (Yorktown, VA) and his three daughters; Jody Rasmussen (Roseville, CA), Cristie Patterson-Akin and Ken (Richvale, CA), Connie Patterson (Reno, NV/Sacramento, CA), and his extended family members Steve and Sandra Kaverman of Truckee. He was a proud grandpa and is survived by four grandsons; Curtis Akin (Sarah), Christopher Brixey, Cord Akin and Kyle Akin and three granddaughters; Madison Brixey, twins, Caitlyn and Megan Ebbert along with great-granddaughter Elyse Akin. In North Carolina, Pat is “Uncle Dean,” loved and survived by nephews Taylor (Cyndi) Patterson, Ward (Lori) Patterson, Scott (Maret) Smart, and their families along with nieces Stacey (Mercer) Hurst, Dreama (Rhody) Dhillon, Deana Montague and their families. Sisters-in-law Ann Patterson and Wanda Patterson also survive Pat. In Texas, “Uncle Pat” is survived Cathy Carr, Debbie Garrett and Rick Hafley and their families. Pat kept tabs or in touch as much as possible as these families were raised up. Pat was preceded in death by his parents, younger brother, Jess and youngest sister, Ann along with his two sons, Ed and Warren. Pat will be laid to rest on Friday, May 27, 2016 at 10:30 a.m. in a graveside service at Sierra Mountain Cemetery in Truckee. We invite all those who knew and loved “our dad” to join us in celebrating his life. Don’t forget to bring your “best” stories (and maybe a chair)… because he’ll be listening!

Caswell Dean &#8220;Pat&#8221; Patterson, long-time former resident of Tahoe City, went to be with his Lord and Savior, Jesus Christ on May 13, 2016. Although we hoped this time would never come, his passing was peaceful, with his daughters... View Obituary & Service Information

The family of Mr. Caswell D. Patterson created this Life Tributes page to make it easy to share your memories.