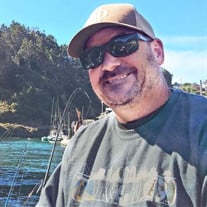 August 20, 1968 – November 24, 2017 Chris Banovich, Tahoe-Truckee local for 28 years, created a legacy touching the lives of everyone he knew. Through his life's journey, he left us with memories of his creative, honest, loving, hardworking, fun, and adventurous self. From inspiring others to reach their full potential, to offering humor and an ear for anyone in need, Chris will be deeply missed. Born and raised in Castro Valley to George and Jodell Banovich, Chris was passionate about the honor and leadership he learned as an Eagle Scout and sharing that with his son Hunter, who recently accomplished the same. A father deeply committed to his children, Chris coached Hunter's Truckee High School Trap Team, inspiring and encouraging all boys and girls on the team. Like father like son, Hunter is now a coach and continues Chris's commitment to helping others. Chris loved watching his beautiful daughter Josie grow up and discover her talent for equestrian competition and strength as a volleyball athlete. Chris and Josie's closest bond was sharing his greatest passion in life, fishing. Spending that time together, outdoors in nature, were some of their happiest moments. On their first date, Chris and Ashley Banovich knew they were the love of each other's life. After 21 years, that never wavered and was an inspiration to all who knew them. Chris and Ashley were wholly committed to each other and to their kids. An adventurous family at heart, they were always off to exotic places, from releasing thousands of baby turtles on the sands of Mexico to off roading on the rocks of Moab. They returned home to the mountains and joyful reunions with their beloved dogs. Chris "Bano's" interest in cooking began at a young age, leading him to graduate from the San Francisco Culinary Academy. First on a cruise ship in Hawaii, then to the mountains of Tahoe, cuisine was his artistic expression in life. Chris's ice sculptings, fine dining presentations, weddings banquets and private gatherings brought joy to thousands. But perhaps most memorable of all, are the dinners Chris created with so much love for his family and friends. These were over the top gatherings that many will cherish. Chris is survived by his wife Ashley, his son Hunter, his daughter Josie; his parents George and Jodell Banovich of Pleasanton, California; and his sister Lesley Banovich Hodges and her family Bryan, Emma and Ella of Pleasanton. A Celebration of Life for Chris is planned in Squaw Valley, where Chris and Ashley first met. The service is on Sunday, January 7th, 3pm at the Olympic Valley Lodge (OVL) 1901 Chamonix Place, Olympic Valley, CA 96146. View an album of Chris and upload photos of your own for the service to http://bit.ly/2B1d0ww . Chris's many culinary friends are providing light appetizers, coffee, iced tea and lemonade at OVL. Friends and family are invited to gather afterwards at Rocker in the Village. Many have asked, and thus a fund has been created to help with medical costs. Plumas Bank "Banovich Family Memorial Fund" 11638 Donner Pass, Truckee, CA 96161 https://www.youcaring.com/banovichfamilymemorialfund-1037535

August 20, 1968 &#8211; November 24, 2017 Chris Banovich, Tahoe-Truckee local for 28 years, created a legacy touching the lives of everyone he knew. Through his life's journey, he left us with memories of his creative, honest, loving, hardworking,... View Obituary & Service Information

The family of Mr. Christopher George Banovich created this Life Tributes page to make it easy to share your memories.