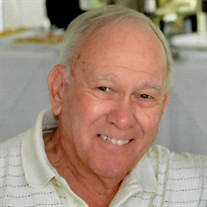 December 3, 1934 – December 21, 2017 Donald Edward Clukey passed on to the "Great Architect" in the sky December 21, 2017. Don was born and raised in Bangor, Maine. Following graduation from Bangor High School, he entered military service at Fort Devens, Massachusetts and as he would like to say "served eight years eleven months one day and fifteen hours". He served overseas in Thule, Greenland and Korea. Honorably Discharged at Fort Bliss, Texas, he was employed in the aerospace industry for thirty-four years, most notably with Ford Aerospace Corporation and Lockheed Martin. He participated in many of this nation's military and civilian space programs and worked overseas in Iran and Italy. Retiring from Lockheed as a Program Director, he and Marie, best friend, partner, and beloved, settled initially in Kings Beach and subsequently built their retirement home in Truckee. He now believes he is a Truckee local (as defined by him as) a resident for twenty or more years, owner of two dogs, a Subaru, a pick-up truck and a backhoe (no backhoe but a small tractor). Don and Marie could often be seen on the slopes at Northstar after appreciable snow fall. Summers were spent either traveling, yard work, garden railroading, tending to the Alfa Romeos, or soaking up the sun on the back deck. Don was a Past Master of Truckee Masonic Lodge #200, a member of Mt. View De Anza Lodge #194, the Scottish Rite and KERAK Shrine in Reno. In addition to Marie, he is survived by son Gary from Parker, CO; cousin Sherilee and husband Phil from Winterport, ME; cousin JoMelinda from Roanoke, VA; Brother-in-Law Clifford and wife Kathy from Yucaipa, CA; Brother-in-Law James and many nieces and nephews. A Memorial Service will be held on January 13, 2018, 11:00 AM at the Masonic Memorial Gardens, 437 Stoker Avenue Reno, NV. In lieu of flowers, donations may be made to Nevada Scottish Rite Foundation, Shriner's Hospital for Children, or California Masonic Homes Endowment Fund.

The family of Mr. Donald Edward Clukey created this Life Tributes page to make it easy to share your memories.