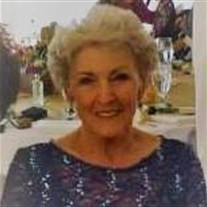 Dorothy Hudecek. October 30, 1937 to July 31, 2017 Dorothy “Dottie” Hudecek passed away peacefully at Tahoe Forest Hospital on Monday, July 31 due to complications from pneumonia and a subsequent heart attack at the age of 79. Dottie was born in 1937 in Chelsea, Massachusetts. Due to family circumstances, she lived and was raised by her maternal grandmother, Reuben LeGrow in Chelsea. At the age of 15, she moved to Downey, California and was reunited with her mother, Sadie Kudelka and her sister, Mary Ashley. Dottie graduated from Downey High School and married in 1954 and had her first child (Chris) in 1955. Through life transitions, she then divorced and shortly thereafter remarried and had her second child (Cindy) in 1958. She settled in Buena Park, CA being a young working wife and mother. Her third child (Kevin) was born in 1963. Again she experienced life transitions and found herself a single mother of 3 young children. She was dedicated to providing the best for her children and knew she needed to further her education to do so. Dottie enrolled at Santiago College Medical Assistant and Nursing Certification Program, working full time, taking care of her children and attending school, but was able to graduate. She worked in the medical profession for 36 years until she retired in 1998. She loved her work in the medical field and was passionate about helping her patients and doctors. She experienced many other life transitions, remarrying, moving to Anaheim, CA and then another divorce, but all the while dedicated to her children and her work. In 1980 she met Tom Hudecek, a Fire Captain with the Alhambra Fire Department and they married in 1981, living in Orange, CA. Her many vacation travels always included traveling to or through the Northern Sierras and Truckee. She fell in love with Truckee and always dreamed of moving there. Her dream came true in 1999 when she left Southern California for good and settled in her beloved Truckee. She settled into the community of Truckee, becoming involved with the Truckee Wolverine Football Boosters while her two grandsons, Steven and Casey attended and played football there. But she continued to be an avid supporter of the Wolverines even after their graduation, supporting the boosters and attending the home football games, her pom poms and noise makers at hand, always cheering the Wolverines on. The other passion she took up after moving to Truckee was horses. At the age of 64 and having no previous experiences with horses, she got a horse (Glori) and then a 2nd horse soon followed. Some of her most treasured times were riding the trails in and around Truckee with her equine companions. Dottie had a passionate and tenacious nature in pursuit of what she felt was the right fight and some would say that is putting it nicely. One such pursuit was learning more about her deceased father. As a child picking up on family rumors, she had learned her father died at sea during World War II and had received a medal, but that was all she knew. Taking on the cause to learn more, after two years of communications and research with the US Navy Department, she received the information she had searched for. Her father, James G. Squires was a Merchant Marine who was killed at sea after his ship had been torpedoed. Due to his efforts, the 9 surviving Marines were able to make it to a lifeboat and rescued by a British ship, but he lost his life in the effort. He was awarded the Distinguished Service Medal citation and had a US Naval aircraft cargo carrier named after him, the USS Squires. This brought her a great sense of pride. Other passionate pursuits included co-founding the Five Coves Conservancy in Orange, CA to advocate against a large residential expansion on land that had been ear marked for open space and recreation. She spent many a night at City Council meetings fighting this fight with much success. In Truckee, she was an avid advocate for keeping the horse arena and hoping to keep the rodeo coming to Truckee, as she put it “for the kids”. To keep up on the local politics and going ons of Truckee, she enjoyed attending what she called the “unofficial city council meetings” on Friday nights at Casa Baeza where she could meet with old friends. Dottie is survived by her husband Tom Hudecek, her three children, Chris Crowe, Cindy Pope and Kevin Reese; five grandchildren, Steven, Casey, Ashley, Kirsten and Sarah and 5.5 great-grandchildren (yes one is on the way) and her furry family, her two horses, Glori and Bella and her canine companion, Dus. For those who knew Dottie, A Celebration of Life will be held at the Truckee River Winery on Friday, August 18th, 2017 from 5:00 pm to 7:00 pm. The Winery is located at 11467 Brockway Rd., Truckee, CA. While not necessary to attend, if possible, please drop a note if you plan to attend to [email protected] Dottie was passionate about two organizations, so in lieu of flowers, the family asks you to consider donating to either: Forever Morgans Rescue, P.O. Box 994, Molalla, OR 97038. www.forevermorgans.org Norcal Golden Retriever Rescue, 405 El Camino Real #420, Menlo Park, CA 94025-5240, www.NGRR.org

Dorothy Hudecek. October 30, 1937 to July 31, 2017 Dorothy &#8220;Dottie&#8221; Hudecek passed away peacefully at Tahoe Forest Hospital on Monday, July 31 due to complications from pneumonia and a subsequent heart attack at the age of 79. Dottie... View Obituary & Service Information

The family of Dorothy "Dottie" Hudecek created this Life Tributes page to make it easy to share your memories.