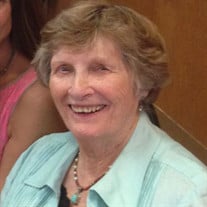 Elrose Rose, beloved, long time Tahoe City resident, passed peacefully in her Dollar Point home in the early hours of February 12, 2017. A native of Petaluma California, the first born of three daughters of German immigrants, Johannes and Therese Knudsen, Elrose spent her childhood helping on her family’s egg farm After graduating from Petaluma High School ( 1950) i, her life adventure began receiving a Liberal Studies degree and teaching credential from San Francisco State (1954), In short succession, she answered the calls of duty and adventure and began her career teaching Kindergarten at Kings Beach Elementary School. She continued teaching in the Tahoe Truckee Unified School District as a Special Education teacher, servicing many of the schools in the district, until her retirement. In 1957, Elrose and fellow Petaluma native, Tom Louderback married and had three children, Lynn ( April 1958), Jodi (November 1959 ) and Tommy ( February 1961), The family lived in the Bay Area until the resolution of the marriage (1967) when Elrose and kids made the permanent move to Tahoe City. In 1970, Elrose married Dan Rose, thus creating the iconic name, Elrose Rose. Their very happy marriage of more than thirty years ended with Dan’s death, Anyone who knew Elrose knew of her passion for the card game bridge which she learned in college and played until weeks before her death. It was through bridge that she made many of her most enduring friendships as well as a constant influx new acquaintances. No doubt she will be sorely missed by her bridge communities as much for her fun, authentic presence as well as her great skill at the game. The Knudsen sisters, Elrose, Marleen Barnett of Squaw Valley and Elaine Goetsch of Petaluma always maintained very close relationships. At the mechanization of the egg industry and thus obsolescence of previous farming techniques, the three sisters joined forces to save the family farm in Petaluma which is currently owned and occupied by Elaine and husband Wilbur Goetsch, In addition to her three children and two sisters, Elrose left her mark on the world with eight grandchildren and four great grandchildren: Lynn’s children, Max Louderback-Stratton of San Rafael, Rory Louderback-Stratton who precedes her grandmother in death, Jodi’s children, Johannes Louderback-Valenzuela of Santa Cruz and Annabelle Louderback-Valenzuela of Davis, and Tommy’s children and grandchildren, Katherine Quetin of San Rafael and husband Justin and their two children Avery and Ronan, Brian Louderback of Sacramento and his two children Brandon and Zooey, Molly Louderback of Petaluma and Riley Louderback of Chico. Not to be forgotten are Greg and Linda Rose of Sonoma, their children Marcy Rose Bilberry of Sonoma and Andy Rose of Grass Valley and their grandchildren as well as Dan’s other son, Steve who died in 1974, Generous with her time and resources to those in need, unpretentious with a quick sense of humor and refreshing authenticity Elrose will be missed by family, neighbors and friends.Though she belongs to the ages now, those of us who knew her and loved her will never stop musing over our time with her. Contributions can be made in her name to Saint Jude’s Children’s Research Hospital or The American Macular Degeneration Foundation.

The family of Elrose Rose created this Life Tributes page to make it easy to share your memories.