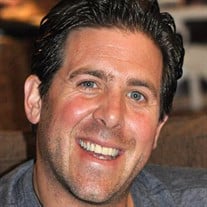 Jerry James Belden “Jer Bear”, 43, of Truckee, California passed Sunday, September 10th at his home. Jerry was born in Oswego, New York, the son of William Belden and Virginia (Frable) Belden, and spent his boyhood years in Oswego and Mexico, New York. As an adult, he traveled all over the United States as a registered nurse in Cardiology and recently, he lived and worked in the Lake Tahoe area. He felt at peace in the mountains and enjoyed all that the Sierras had to offer. Jerry attended St. Mary’s Elementary School and Bishop Cunningham Junior/Senior High School in Oswego, New York and graduated in 1993 from Mexico Academy Central High School and completed the LPN program from Oswego County BOCES. He received his associate degree in nursing in 1996 from Mohawk Valley Community College and his bachelor of science in nursing from Saint John Fisher College in Rochester, New York in 1998. Upon graduation, he joined the traveling nursing association working throughout the United States including New York, Arizona, California, Connecticut, Colorado and Nevada as an Intensive Care Nurse. Recently he was a hemodialysis nurse at Liberty Dialysis in Reno, Nevada. His love of nursing inspired many to pursue nursing as a career and created a special bound between he and his patients. He brought laughter and joy to otherwise painful days. A sporting enthusiast both as a participant and fan (cheering for “The CUSE”), he played basketball, football and baseball throughout most of his life. He loved to hike, mountain bike, ski, surf, laugh, sing, dance, joke and especially enjoyed spending time with his family and friends. “Jamband Jerry” was a music enthusiast following an eclectic association with everything from Wide Spread Panic, The Allman Brothers, and the Dave Matthews Band to Pink Floyd, The Grateful Dead and Miles Davis. One of his great passions was attending concerts, music festivals and any event that brought people love, laughter and joy. He is survived by his parents, William Belden of Durham, North Carolina, Virginia (Frable) Belden of New Haven, New York; sister Tara (Belden) Bell and brother-in-law David Bell of Chapel Hill, North Carolina; brother Errol Belden and sister-in-law Jenna (Funston) Belden of Truckee, California; 3 nieces, Samantha, Sophia and Scarlett Bell of Chapel Hill, North Carolina; nephew Asher Belden of Truckee, California; and many uncles, aunts, cousins and friends. He is predeceased by his grandparents, Dr. Jerry James Belden and Loretta (McCauley) Belden and Charles Frable and Doris (Chapel) Regan. A celebration of life will be held at Alpine Meadows, California on Sunday, September 24th from noon-4pm. Funeral services will be held at St. Mary’s Catholic Church in Oswego, New York on Saturday, September 30th at 9:00am. Burial will be in St. Peter’s Cemetery in Oswego, New York. Calling hours will be held prior to the funeral at St. Mary’s Church from 8:00-9:00am. A reception will be held following the services for family and friends at noon at Bridie Manor in Oswego, New York (wear colorful clothing). Contributions can be made in memory of Jerry to highfivesfoundation.org or your local animal shelter.

The family of Mr. Jerry James Belden created this Life Tributes page to make it easy to share your memories.