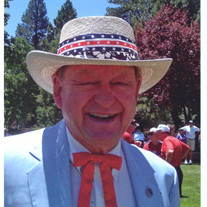 USN LCDR (Ret.) John Herbert “Jack” Schroeder was born January 26, 1935, in San Francisco, California, and passed away at his home in Incline Village, Nevada, on June 20, 2016, surrounded by his wife, Marianne, and their three children, Catherine, Michael, and Leslie. He grew up in the foothills near Sacramento, and had many happy memories of time spent at Lake Tahoe with his family. He graduated from San Juan Union High School in 1952, where he participated in track, cross-country, drama, and served as Vice President of his class. He was accepted in Stanford University and attended until transferring to Cal Poly, San Luis Obispo, with his best friend. Following their sophomore year, they enlisted in the Navy together. Sponsored by the Navy, Jack soon thereafter graduated from George Washington University in Washington, D. C., and was commissioned as a Naval Flight Officer. During his distinguished and decorated Naval career, key assignments included the Composite Photographic Squadron 63, Miramar, California; Patrol Squadron 6, Barbers Point, Hawaii; U.S. Military Assistance Command, Danang, Vietnam; USS Lexington (CVS-16), Pensacola, Florida; Air Test and Evaluation Squadron 1, Key West, Florida; and Fleet Air Reconnaissance Squadron 2, Rota, Spain. He retired in 1974 and immediately began working for Lockheed Martin as a Flight Test Engineer and Avionics Instructor. His work locations with Lockheed included Iran, Japan, Nova Scotia, Portugal, and Italy. He retired from Lockheed in 2001. Following retirement, Jack spent his time with his wife, Marianne, volunteering and serving the community of Incline Village. Among his many activities at Incline Village, he served as President of the Incline Village/Crystal Bay Veterans Club, mentored and advocated for JROTC students and AmeriCorps members, visited disabled veterans at the Reno VA Hospital, volunteered at events sponsored by the Far West Disabled Sports Wounded Warriors, actively helped with IVGID programs, was Grand Marshall for the 2011 July 4th parade and celebration, was a member of the Military Officers Association of America, and he volunteered annually at the Lake Tahoe Shakespeare Festival, where his smiling face could be found, rain or shine, helping people enjoy an event he loved at a place he cared for deeply. Jack is survived by his loving wife, his sister, three children, and eight grandchildren, and he is sorely missed by his many friends in Incline Village and around the world. Fly with the angels, Jack.

The family of Mr. John Herbert "Jack" Schroeder created this Life Tributes page to make it easy to share your memories.