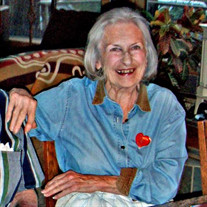 Justine, beloved wife to Philip Henry Threshie Jr (deceased) of 61 years and mother of Philip, Jonathan, and Craig, died peacefully at her Truckee home of heart failure. Justine was the daughter and only child of Wenona Mullaney Franklin and Frederic J Franklin. She was born (Kathryn Justine Franklin) in New Bedford, Massachusetts and grew up nearby in Fairhaven, Massachusetts. She was baptized into the Roman Catholic Church at St. Joseph’s Church, Fairhaven on September 7, 1930. Justine enjoyed her early years with a very active social life in and around New Bedford, Fairhaven, Boston, Nantucket, Cape Cod and the surrounding Massachusetts coast, including many happy times watching Ted Williams play in Fenway Park. Justine studied Elementary School Teaching at Leslie College in Cambridge, Massachusetts and loved the college-town life in Cambridge. At Leslie College, Justine maintained her very active social life and popularity, and served as president of her class, secretary of the Student Government, treasurer of the Glee Club, and a member of the Newman and Outdoor Clubs. She graduated in the summer of 1952 and earned her teaching credentials from The Commonwealth of Massachusetts, Board of Education in September of that year. 1952 was a busy and exciting time, as Justine and Phil met in Fairhaven, and they married on June 28, 1952. They journeyed west on a very turbulent flight (she never flew again after this) and settled first in Santa Monica where Philip III was born in April 1953. Moving south to Chula Vista, Jonathan Charles was born in December 1954. The family moved north to the bay area in time for Craig Franklin to be born in Walnut Creek in 1957. In just a five year span, Justine married, carried and gave birth to three boys, moved from her lifelong home of Massachusetts across the country to California (where she had never been before), and began a new, rich and dynamic west coast family life. Family life was her passion; running the household, raising and feeding three very active boys, being the entertaining-wife for her corporate husband, and driving the three boys around and supporting them through school activities and countless sports practices and games. Weekends were often for family outings, and Justine would pack up the whole family, dogs too, prepare all meals and go camping in the Sierra and along the California coast, where she loved the beautiful environment with her family. She loved the 49ers football team too, and enjoyed many seasons of games with family and friends. In the early 1960s, Justine fell in love with San Francisco, and especially Chinatown. With Phil traveling into the city often for work, she was able to develop wonderful relationships with Chinese restaurateurs, chefs (she loved to cook, and was excellent in many cuisines), business owners, artists and historians. Justine created J & J Walking Tours in the mid 60s, and enjoyed a bustling and enriching business while fostering her love for Asian arts and foods. Justine’s creative passions also were focused on her California-lifestyle homes, of which she designed and created nine with her family in Orinda, Danville, Alamo, Cool, Monterey, and Truckee. Her skill and knowledge in Asian design was translated into all of these very beautiful, creative and unique custom homes. While living in Cool, Justine enjoyed her family and grandchildren tremendously as well as a fantastic group of close friends that never seemed to stop living life to its fullest, where she was able to enjoy performing at events and dazzling friends with her gorgeous alto soprano singing voice. She and Phil loved a life of travel in their motor home with son Philip, while he was racing formula and Indy cars at tracks all over the USA. In Monterey, Justine flourished in the rich arts culture, as well as volunteering many hundreds of hours for the Hospital Auxiliary as a Candy-Striper. When her husband Phil lost most of his eyesight during a surgery in 1991, life changed drastically for Justine as well, as she became Phil’s primary caregiver for all of his needs for the last 23 years of his life (he passed February, 2014). She was there constantly for him, and this commitment impacted her tremendously for the rest of her life. Justine is survived by her sons Philip (wife Suzanne), Jonathan (wife Melinda), and Craig, as well as eight grandchildren and fourteen great grandchildren. A celebration of Justine’s rich and dynamic life will be held in Pacific Grove, California, on Saturday afternoon February 18th, 2017 from 2:00 to 5:00. Please call or text Craig Threshie at (808) 212-8597, or email to [email protected] for details and directions. In lieu of flowers, the family would appreciate donations be made to support Cystic Fibrosis Research Inc.: http://www.cfri.org/home.shtml

Justine, beloved wife to Philip Henry Threshie Jr (deceased) of 61 years and mother of Philip, Jonathan, and Craig, died peacefully at her Truckee home of heart failure. Justine was the daughter and only child of Wenona Mullaney Franklin and... View Obituary & Service Information

The family of Mrs. Justine Franklin Threshie created this Life Tributes page to make it easy to share your memories.