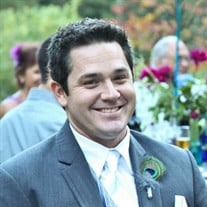 Leo Edward “Lee” Smith, 37, of Oakland California unexpectedly passed away Saturday, January 27, 2018 while snowboarding with his family at Homewood Mountain Resort near Lake Tahoe. He was born in Orange, California on September 17, 1980 to Leo and April Smith. Lee graduated from Santa Margarita Catholic High School and went on to get his B.A. in Communication Studies from the University of San Diego. He married Zorianna Horn on October 8, 2011, and they have two beautiful children, Sawyer, 3, and Stella, 1½. He is also survived by his parents, Leo “Lee” and April Smith, his sisters, Debbie Colabianchi, Lori Pettenger, Lisa Chambers, Kendle Salisbury and his brother, Ryan Smith, his grandmother, Rita Vohnout, 7 nephews, 4 nieces, 3 aunts, 2 uncles and 12 first cousins. Lee loved golf, snowboarding, boating, being outdoors and cheering on the Oakland Raiders. His career was spent in Software Sales Engineering, most recently at Tickr, and for several years at Box. His many friends remember him as a great family man, for his smile, his infectious laugh, and his sense of humor. Funeral services will be held at 1 p.m. on Saturday, February 17th at Corpus Christi Church, 322 St. James Dr., Piedmont, California followed by a reception at Eve’s Waterfront, 15 Embarcadero West, Oakland, CA In lieu of flowers, college savings accounts have been set up for each of his children, Sawyer Smith and Stella Smith. Online and by mail contributions can be made at gift.my529.org. Use gift code GQ50H7 for Sawyer, FXJHAG for Stella.

Leo Edward &#8220;Lee&#8221; Smith, 37, of Oakland California unexpectedly passed away Saturday, January 27, 2018 while snowboarding with his family at Homewood Mountain Resort near Lake Tahoe. He was born in Orange, California on September... View Obituary & Service Information

The family of Leo Edward "Lee" Smith created this Life Tributes page to make it easy to share your memories.