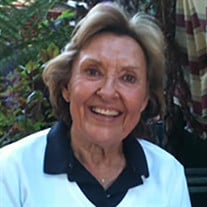 Leone Fladeland - 1934-2017 Leone “Lee” Rupp Fladeland passed away Tuesday, March 21, 2017 in Truckee. Born in 1934 - in what was then considered rural Los Angeles - Lee graduated from Our Lady of Corvallis High School in Studio City. After graduation, one of her favorite jobs was working in the fan mail room at Universal Studios. In 1955, she married the love of her life, Ron Fladeland and raised their family of fivein the San Fernando Valley. In the early 70s, they moved to San Jose where they lived until 2000 when they retired to Tahoe Donner. For over 20 years, Lee worked in the accounting department a Lucille Packard Children’s Stanford Hospital in Palo Alto. After retirement, she worked tirelessly for the Assumption Church and the community’s Food and Resource Center in Truckee. In short,Lee "walked the walk", spreading God's word, even while working with the homeless. As her vision began to fail, her work there became profoundly meaningful because the results of her efforts could be seen so clearly, despite her macular degeneration. As a mother, her kindness, patience, and generosity was never ending. She was the mom who loaded all the neighborhood kids into the back of her El Camino, then took them out for ice cream. If the family dog came along, he got his own ice cream cone, too! When relatives fell on hard times, Lee and Ron were always there to help - welcoming her nieces when they needed her most. They also opened their door to many of their childrens' friends who were suffering various difficulties at home. Lee's grandchildren describe her as the perfect “Grammy” who always had hot chocolate and hugs waiting after a long day of playing in the snow. Lee is survived by her husband, Ron Fladeland; her children, Victoria (David) Sayer, Kristin (Dan) McWeeney, Jennifer (Keith) Borman, Mark Fladeland and his wife Bonnie Schisler, and Nancy (Larry) Myers; her grandchildren, Amanda, Zachary, and Maxwell Borman, Nina and Jonah Myers, and Mary ShayMcWeeney; and her brothers, Joseph (Ann) Rupp, and John (Susan) Rupp. A vigil begins at 10:00 am Saturday, April 1, at the Assumption of the Blessed Virgin Mary Church 10930 Alder Dr. Truckee, CA 96161 A Rosary will be at 10:30 am and Mass will begin at 11:00 am. A reception will follow.

The family of Mrs. Leone "Lee" Fladeland created this Life Tributes page to make it easy to share your memories.