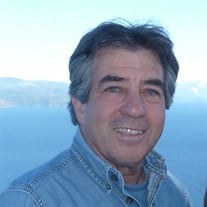 On June 18, 2017 Louis T. Guzzi, known to all but officialdom as Ted, died peacefully at his home in Carnelian Bay, surrounded by friends and family, after a long, hard fight with cancer—the last act of an exemplary life. He was 70 years old. Born in Taylor, Pennsylvania in 1947, he moved to Sacramento at the age of five with his widowed mother and sister. He took to California like a young John Muir, beginning by exploring the delta region paddling his homemade canoe and expanding ever outward until, as one high-school friend remembers, he was snowshoeing into the mountains in the dead of winter to overnight in improvised snow caves. Then, in 1965, the day after he graduated from Mira Loma High, he headed straight for Yosemite to begin what would be the first of nine seasons of work for the National Park Service in Tuolumne Meadows as a garbage man—considered, by those in the know at the time, to be the dream job. In the off-season, he would travel around the state in his VW van, constantly adding to his knowledge about the flora, fauna, geography, and geology of his adopted state, creating a map in his head of all the best places where nobody went. He worked his way through college at a deliberate pace, eventually graduating with a B.S. in Biology from Fresno State. But for him, nature was a hands-on project, so he took to sharing his knowledge in a hands-on way, marching 500 miles from the Bay Area, through the Central Valley, to Los Angeles in the early spring of 1970 with Ecology Action. This newly organized group, described by the New York Times as “brash, activist” stopped at schools and town halls along the way to teach the “new” science of ecology, stirring up interest in, and publicity for, the first Earth Day, which was the name of the party they threw when, come April, they finally got to L.A. Nine months later, he was at it again. Two oil tankers had collided in San Francisco Bay, fouling the waters and thousands of seabirds in the resulting spill. Ted volunteered for the clean-up, spending three months painstakingly cleaning the birds with an ad-hoc organization that would become International Bird Rescue. Like anyone who has spent a lot of time alone in wild places, Ted was possessed of a deep, private, earth-centered spirituality. This led him to classical Chinese and Japanese wisdom literature and eventually to the discipline of Transcendental Meditation, which he embraced so fully he traveled in 1974 to Switzerland, and later, India, to practice at the feet of the movement’s leader, Maharishi Mahesh Yogi. He spent the next seven years in the upper ranks of the movement, traveling the world for the cause of enlightenment, teaching the TM technique. Then the mountains called him back. Ted had spent winters in the early 70’s working for his brother-in-law in the construction trade in Lake Tahoe, and in 1981 he returned to pick up where he left off. As fate would have it, and Tahoe being Tahoe, an old friend from Yosemite days, an architect, happened to be living there. She had a house, a job, and VW van. “Why not?” as Sherry puts it. They were married in 1983, and by 1984 they were finishing each other’s sentences. Soon they partnered up with a friend, Kevin Homan, in an enterprise called Timber Design, building custom, hand-crafted, artistically refined log homes, not only in and around Tahoe, but in Montana as well. For the next 25 years, this is how they spent their time between adventures, which involved not only plenty of backpacking trips with friends into the high country but extensive travels to the far corners of the earth. On the side, they volunteered with the BEAR League and the Sierra Wildlife Coalition, educating Tahoe residents and visitors about their wild neighbors—bears, beavers, coyotes, and all the rest. Along the way, Ted managed to become an accomplished wildlife photographer and an expert fly-fisherman. But then, the truth is he had the energy of three men in his always fit, compact frame. Over the course of his full life, Ted Guzzi became a master of the art of living, turning everything he touched into art, and every other person he met into a lifelong friend. Fatherless from the age of five, and childless by choice, he was famous for treating his friends’ children, and miscellaneous strays, as lovingly as if they were his own. He didn’t have to work at being generous, it was just his nature. As one friend said, “I have never known a better human being.” Let’s leave it at that. **** Ted Guzzi is survived by his beloved wife and soul mate, Sherry, his sister and brother-in-law, Rosie and Norm Doolittle, their sons, Trent and Ted, his grandnieces, Alexx, Makena, Lyla, and Everly, and an uncountable number of friends. Contributions in his name to the Sierra Wildlife Coalition or another wildlife/wilderness charity would be a fitting tribute.

On June 18, 2017 Louis T. Guzzi, known to all but officialdom as Ted, died peacefully at his home in Carnelian Bay, surrounded by friends and family, after a long, hard fight with cancer&#8212;the last act of an exemplary life. He was 70 years... View Obituary & Service Information

The family of Louis T. Guzzi created this Life Tributes page to make it easy to share your memories.