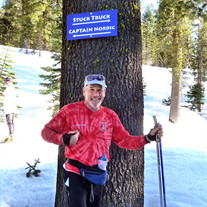 Mark Steven Nadell (aka “Captain Nordic”) passed away on the evening of February 5th, 2017, surrounded by his wife and children. He was 60 years young. Mark had been under treatment for metastatic melanoma for just over 2 years. Mark was born in North Hollywood, CA and was raised in the San Fernando valley. He attended CSU Northridge, initially as a music major, ultimately graduating with a degree in Recreation and Leisure studies. During his teens and early twenties, Mark spent much of his free time hiking and skiing in both the mountains of Southern California and in Yosemite. He developed a deep love for the outdoors and outdoor activities. Mark eventually moved to Berkeley, CA, where he worked at both Sierra Designs and Marmot Mountain Works (to support his outdoor habits.) He continued to spend his free time in the Sierra, backpacking and skiing, as well as cycling all around the Bay Area. During these years he developed an interest in advertising and marketing and ultimately earned an MBA from UC Berkeley. While at Cal, he met his wife, Pati, and also started his graphic design business: MacBeth Graphics. Mark and Pati bought their first home in Truckee in 1988, and moved to Truckee permanently in 1991, where they raised their two children: Jordan (age 26) and Rachell (age 23.) Mark was truly a modern day renaissance man, having many interests and talents. He ran his own graphic design business until his death. He was the main coach for the Truckee middle school’s nordic ski team, coaching literally hundreds of kids over the course of 16 years. His main focus as a coach was to promote a love of the outdoors, as well as teaching life skills by encouraging his athletes to do their personal best and to try things they did not think that they could do. Mark always emphasized the effort put forward over the results achieved. He also personally enjoyed many passions: nordic skiing and ski racing, cycling, hiking, and playing basketball, where he was a regular at the pick-up court. Other facets of Mark’s life included music: he was an active member of TAMA, he played piano in numerous holiday shows. He was also the pianist for many of the Truckee High School musicals, and supported music and music programs (especially for youth) throughout his life. Mark was also an amateur photographer. He specialized in sports photography - always managing to capture the joy and hard effort put out by athletes of all levels and ages. Mark’s proudest accomplishments were his two children. He produced two self-reliant, independent and unique young adults who amused him and brought him great joy throughout his life. Mark is survived by his wife of thirty years, Pati Johnson (of Truckee,) his children Jordan Nadell (of Hayward, CA) and Rachell Nadell (of Seattle, WA) and his siblings: Sally Emeson (of Oakland, CA), Bob Emeson (of Santa Monica, CA), and Barry Nadell (of Chatsworth, CA.) His spirit also lives on in the lives of his many friends and the multitude of families who were touched by his energy, enthusiasm, and passion. He will not easily be forgotten.

Mark Steven Nadell (aka &#8220;Captain Nordic&#8221;) passed away on the evening of February 5th, 2017, surrounded by his wife and children. He was 60 years young. Mark had been under treatment for metastatic melanoma for just over 2 years. Mark... View Obituary & Service Information

The family of Mr. Mark Steven Nadell created this Life Tributes page to make it easy to share your memories.

Mark Steven Nadell (aka “Captain Nordic”) passed away on the...