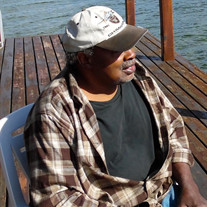 Marvin “Wayne” Conston, died unexpectedly at home on May 18, 2016 in Truckee, California at the age of 62. Marvin is survived by his sisters, Shirley Priestley, of Oakland, California and Glenda Conston of Napa, California; his brothers, Brian Conston of San Diego, California and Ronnie Conston, of Oakland, California and his niece, Courtney Marve’ Conston-Chism of Dallas, Texas and a large extended family in California and Louisiana. He is preceded in death by his parents, Germon “Tiny” and Muriel. Marvin was born on September 30, 1953 in Pineville, Louisiana to Germon Conston Jr. and Muriel Marve’ Conston. He attended Truckee Elementary School and graduated from Tahoe-Truckee High School in 1972. Marvin attended Sierra Jr. College in Rocklin, California but did not graduate. Over the years, Marvin worked at local lumber mills, Southern Pacific Railroad and in construction. Marvin loved to fish and took great pleasure in tending the trees he recently planted. Visitation is scheduled on May 31, 2016 at Truckee-Tahoe Mortuary, 10126 Church Street from 1:00 p.m. to 4:00 p.m. A funeral is scheduled on June 1, 2016 at 11:00 a.m. at the Starlight Missionary Baptist Church, 171 Redberg Ave, East Quincy, California; interment immediately following at East Lawn Cemetery, 150 Redberg Ave, in East Quincy, with a reception to follow at Pioneer Park 34 Fairground Road, Quincy. All are welcome to attend and celebrate Marvin’s life. The family would like to thank all of Marvin’s friends who have reached out to extend their condolences. We were blessed to have such a wonderful brother and we know you were equally blessed to have him as a friend.

Marvin &#8220;Wayne&#8221; Conston, died unexpectedly at home on May 18, 2016 in Truckee, California at the age of 62. Marvin is survived by his sisters, Shirley Priestley, of Oakland, California and Glenda Conston of Napa, California; his brothers,... View Obituary & Service Information

The family of Mr. Marvin "Wayne" Conston created this Life Tributes page to make it easy to share your memories.

Marvin “Wayne” Conston, died unexpectedly at home on May 18,...