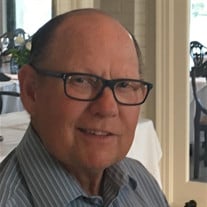 Following a lengthy battle with cancer, Mike W. Bechtold of Truckee, California passed away peacefully in his home in December of 2020. He was surrounded by his loving family. Mike was born in 1946 in Huntington Park, CA. He graduated from Gary High School and married Caren Searing of Pomona, California in 1965. Mike served in the United States Marine Corps from 1966 to 1967. Following the birth of their first daughter, Mike and Caren moved to Truckee, where he built a home and life with his own two hands. Mike was a team leader in the meat cutting shop at Safeway for over 15 years, and later worked as a manager for Smith’s Foods. He was the first to tackle a hard job, earning the absolute trust and confidence of his managers and the respect of his crew. After retiring from his first career, Mike worked for the State of California Department of Transportation keeping I-80 safe during the winter. Again, he showed numerous young people on his crew how to lead by example and get the job done. He was a leader in the community as well and was the president of the Truckee Horsemen’s Association for many years. Mike was also an avid hunter and fisherman. He earned his commercial captain’s license and guided fishing expeditions in Alaska for 5 years. His trophy collection is the envy of Truckee’s sportsman. He will be lovingly remembered by his wife of 55 years Caren, daughters Mindy McCreery (Daniel McCreery) and Molly Bechtold (Capt. A.C Lynch, USN, Ret.), sisters Marie Foland (Doug Foland) and Carole Schmuck (Steve Schmuck), six grandchildren (Chance, Justin, Logan, Mikina, E.C. and Emmie), nieces, nephews and countless friends. A celebration of life is planned for a later date. Memorial donations may be made in Mike’s name to Nevada Bighorns Unlimited (PO BOX 21393 RENO NV 89515-1393). The mission of the organization is to protect and enhance Nevada’s wildlife resources for sportsmen, outdoor and wildlife enthusiasts for this and future generations. For further information, please go to nevadabighornsunlimited.org. The family wishes to extend a special thank you to the doctors, nurses and staff at Gene Upshaw Memorial Tahoe Forest Cancer Center, including Arhin Koppel, MD, and Kathleen Legarza, MD, as well as Reini Jensen, MD of Tahoe Truckee Medical Group, for their exceptional care and compassion.

Following a lengthy battle with cancer, Mike W. Bechtold of Truckee, California passed away peacefully in his home in December of 2020. He was surrounded by his loving family. Mike was born in 1946 in Huntington Park, CA. He graduated from... View Obituary & Service Information

The family of Michael Willard Bechtold created this Life Tributes page to make it easy to share your memories.