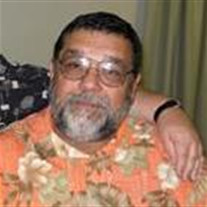 Larry Ramirez died peacefully at his home in Verdi, CA on Monday February 6th 2017 after a year long battle with cancer. Larry was born to a military family at Hamilton Air Force Base in Vallejo Ca on July 24th 1948. His military background took him to many destinations. California, Arizona, Washington State, and to Misawa AFB on the Northern most island of Honshu Japan. It was there he met his wife to be and they celebrated their 47th anniversary on January 23rd 2017. Larry attended Fresno City College and Fresno State College where he obtained an AA degree in Liberal Arts. Larry had many careers during his life. He spent years as a bank manager for Crocker Bank and Great Western Savings in California. He also had a California Real Estate and California brokers license. Larry was always a very civic individual. He was the youngest ever President of the Kern County Board of Trade in Bakersfield, CA and its first minority President. He reached leadership of many organizations throughout his life including President of his Junior Class in High school, Kern count Board of Trade, Lions Club Reno, and was on the board of Trusties of Taft College, the first minority to serve in that office. Larry spent the last 20 years as Office Manager for the Law firm of Laub and Laub dealing in workers compensation. He retired in December of 2015 and left behind a staff that he greatly loved and who greatly loved him. Larry had two sides. He had a very public side who loved everyone and everyone loved him. He also had a very private side and greatly enjoyed sitting on the front porch with his puppies watching and waiting for deer to walk across the meadow. Larry had 3 sons - Brad, Andrew, and Benjamin and loved them all dearly. He always wanted to hear and share the stories of their lives. Rarely a day went by that one of his sons did not call or visit him, occasionally they would all call around the same time. Larry was proceeded in death by his Father Milton, his Mother Anaheid, and 3 Sisters Patty Ramirez, Becky Morris, and Mona Hobbs. He is survived by his Aunt Isabella of Maywood New Jersey, along with his 3 sons Brad, Andrew, and Benjamin, in addition to his wife of 47 years Cecily. There will be a graveside service Friday, February 10, 2017 1pm at Crystal Peak Cemetery, Verdi CA on Dog Valley Road. In Lieu of flowers please make donations to the American Cancer Society.

Larry Ramirez died peacefully at his home in Verdi, CA on Monday February 6th 2017 after a year long battle with cancer. Larry was born to a military family at Hamilton Air Force Base in Vallejo Ca on July 24th 1948. His military background... View Obituary & Service Information

The family of Mr. Milton Larry Ramirez created this Life Tributes page to make it easy to share your memories.

Larry Ramirez died peacefully at his home in Verdi, CA on Monday...