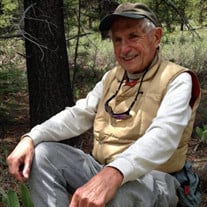 Nick Lippuner, aged 93, of Truckee, CA passed away peacefully on April 27, 2021, surrounded by his immediate family. Born on August 18, 1927, in Plattis, Switzerland, Nick completed his technical education in Switzerland. During this time, he also worked for the railroad and enjoyed a short summer stint at the VW factory in Germany, where he lived rent-free and without utilities in an abandoned castle with a friend. His curiosity and quest for adventure translated into traveling and working in several areas of the globe and he ultimately came to the US in 1954 to work as an engineer. After taking up residence first in Kentucky, then in California, he decided to curtail his travels in favor of marriage and a family. In 1957, he married Marianne Eggenberger, of Oberschan, Switzerland and returned to Los Angeles, CA. Four children followed over the next eight years as he explored various engineering positions with companies such as Hughes Aircraft, and the Swiss Government before landing a long-term position at Litton Industries in the late sixties. His entrepreneurial spirit, quest for knowledge and deep sense of independence brought him to open his own business in the early 70’s from which he retired in 1997. He and Marianne became residents of Truckee in 1998 and enjoyed nature, hiking, the local Swiss Club, and welcoming friends and family traveling through our area. He was a man of many interests with deeply held values: his family, nature, beauty, food, simplicity, quiet, talking politics and global economics. He lived life on his own terms and passed away peacefully in his home just as he wished. Nick will be greatly missed by his daughters Susi and Elisabeth, and his son and daughter-in-law Ueli and Sue Lippuner (children: Marcus, Anna, and Erich) and his extended family overseas. He was well liked in the community and his neighbors will miss seeing him walk down the street wearing his hiking boots and using his walking sticks. Nick is preceded in death by his wife Marianne and son Hans.

Nick Lippuner, aged 93, of Truckee, CA passed away peacefully on April 27, 2021, surrounded by his immediate family. Born on August 18, 1927, in Plattis, Switzerland, Nick completed his technical education in Switzerland. During this time, he... View Obituary & Service Information

The family of Nick Lippuner created this Life Tributes page to make it easy to share your memories.