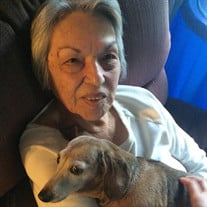 Phyllis Marie Alvarez, 91, of Susanville, California, died on September 27, 2017 at the Tahoe Forest Hospital in Truckee, California. She was born on August 26, 1926 in Susanville, California to Lester Snell and Viola Lowry Snell. She married Leroy Alvarez on February 28, 1946, and he survives her. She is also survived by her daughter, Linda Alvarez of Truckee; grandchildren, Bridgette Streeter of Grass Valley, Michelle LaPena of Sacramento, and Mikel Alvarez, of Las Vegas, Nevada; great-grandchildren Raymond LeBeau, Viola LeBeau and Vivian LaPena of Sacramento. She is survived by many nieces, nephews, great nieces and nephews and cousins who live mostly in Northern California. Phyllis was preceded in death by her son Alfred Alvarez and her mother, Viola Lowry Crume, father, Lester Snell; brother, Herb Snell and sister, Barbara Clark. Phyllis and her husband “Monskie” were longtime residents of Truckee, California. She was a life-long seamstress, having learned to sew at Sherman Institute in Riverside, California. Like many California Indian children from Northern California, she was schooled in Indian Boarding schools, including Steward Indian School and the Sherman Institute. She met Monskie at Sherman and got to know him better after he travelled to Susanville to work in the logging industry with some of her relatives. They married in Reno in February 1946 and had two children, Linda and Alfred soon after. They lived in Susanville until around 1970 when the timber mill near Susanville closed down and they moved to Truckee, California so that Monskie could continue working. Phyllis began her own sewing business called “Sew 4 U” with a studio located downtown above The Tree House children’s clothing store. She later found partners to join in opening Truckee Fabrics, in Westgate Shopping Center, which operated until around 2000. She loved to sew and she enjoyed teaching classes at Truckee Fabrics. She was a strong Native woman, and fiercely loyal to all that she loved. Although she did not participate in her tribal politics, she was a member of the Pit River Tribe, with ancestral ties to Susanville, Greenville, and Likely, California. She was a fun-loving person and a “really good roller-skater” according to her husband. Those who knew her understood that she loved to argue a point, but didn’t hold a grudge after the debate was over. She was also quick to open her checkbook whenever anyone was in need. As a result, she helped and supported countless people during her lifetime. She will be dearly missed by those that she loved. Phyllis wished to be cremated and her ashes scattered at Lake Tahoe. The family is holding a celebration of her life on November 23, 2017 at the Susanville Indian Rancheria. Memorial contributions may be made to the Sierra Senior Services, Meals on Wheels program at 10040 Estates Drive, Truckee, CA 96161, or by mail to P. O. Box 4152, Truckee, CA 96160.

The family of Phyllis Marie Alvarez created this Life Tributes page to make it easy to share your memories.