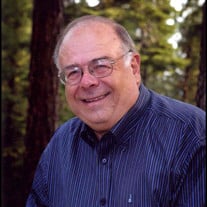 Robert Joaquin Mimiaga of Incline Village died peacefully on June 18, 2015 surrounded by his wife and 8 children. He was 77. Bob was born to Joaquin & Esther Mimiaga (Robman) on September 19, 1937 in Los Angeles, CA. He married Annette Marie Rios, on August 9, 1958. Bob is survived by his wife, Annette & their children, Tom Mimiaga (Pam), Michael Mimiaga, Carol Carter (Steve), Stephen Mimiaga (Eve), Judith Fain, John Mimiaga, Ann Mimiaga, Jennifer Costa (Kevin). Grandchildren; Jessica, Nicole, Mike, Shauna, Kyle, Rachel, Hannah, Sam, Megan, Robert, Andrew, Allison, Lucas & Blake; great grandchildren; Marie, Mike, McKenna & Ethan; Siblings Lucia Richer (Ted), Dolores Simpson & Paul Mimiaga (Victoria) and his many nieces and nephews, relatives and friends. Bob attended St. Raphael Grammar School and Mt. Carmel High School in Los Angeles, CA. He graduated from California State University of Los Angeles, where he earned a Bachelor of Science in Engineering and a Master of Science in Public Administration. Bob met Annette, the love of his life on her 15th birthday on June 4, 1954. They spent the next four years dating and planning a life together. Bob wrote the names of their future children on a napkin for Annette while they were still dating. He was always planning. They married at St. Raphael Church and moved to San Gabriel. In the next 9 years they would have 7 children. “Baby” Jennifer was born in 1970 completing the family. Bob spent over 50 years as a Civil Engineer. Bob joined Harris & Associates in 1976 where he was a partner for over 37 years until his retirement in 2003. Bob & Annette traveled the world. They visited France, Italy, France, Russia, Africa, Costa Rica, China, Germany and across the United States. They biked the San Juan Islands, Italy and Vermont. Their favorite get-a-way was their month in Maui every winter. Bob & Annette made their home in Incline Village in 1998 where they have enjoyed their retirement. Bob took up photography and was very active with Tahoe Art Tour. Bob always enjoyed a good hobby; over the years he learned to play the flute, fly a plane, sail a boat, he played tennis, was busy in the garden and enjoyed bicycling. Our family favorite was when he took up cooking. Bob’s volunteering led him in many directions including Parish Council at St. Francis of Assisi Catholic Church, Rotary, Knights of Columbus, Tahoe Family Solutions, Environmental Center Docent and the local homework club for the children of Incline Village. Bob loved to give back. He created a now self-funded endowment; Engineering Family Support Scholarship at CSULA, his alma mater. He continues to provide scholarship monies to his Grammar School. A Funeral Mass will be held Monday, June 22, 2015 at St. Francis of Assisi Catholic Church, Incline Village, NV. The burial will be held Wednesday, June 24, 2015 at 11 A.M. at Queen of Heaven Cemetery, Lafayette, CA followed by a reception at St. John Vianney Church, Walnut Creek, at 12:30. Bob was truly an Ambassador for Christ as stated by Teresa of Avila when she proclaimed, “Christ has no body but yours; no hands, no feet on earth but yours. Yours are the eyes through which his compassion looks out upon the world. Yours are the feet with which he walks to do good”. In lieu of flowers please make any donations to Tahoe Forest Hospice in Truckee, CA.

Robert Joaquin Mimiaga of Incline Village died peacefully on June 18, 2015 surrounded by his wife and 8 children. He was 77. Bob was born to Joaquin & Esther Mimiaga (Robman) on September 19, 1937 in Los Angeles, CA. He married Annette Marie... View Obituary & Service Information

The family of Mr. Robert J. Mimiaga created this Life Tributes page to make it easy to share your memories.