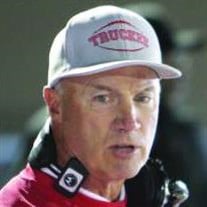 Robert D. Shaffer passed away on Sat., April 1 due to injuries suffered in a head-on collision on Highway 89 south of Sierraville, Calif. He was 64. Born on March 1, 1953 in Greenville, Penn. to Robert and Esther Belle (Clark) Shaffer, he was the fourth child and eldest son and joined a family that grew to include fifteen children. Shaffer attended St. Michaels' elementary and junior high schools in Greenville. When he was ten years old, his family moved across the state line to a farm located in Kinsman, Ohio. At John F. Kennedy High School in Warren, Ohio, he excelled as a student athlete. He went on to attend the University of Dayton on a football scholarship and graduated with a B.S. in Education. While in college, he married his high school sweet heart and love of his life, Lisa (Kozup) Shaffer. Post-college, Shaffer gave insurance sales a try but he quickly realized he wasn't very good at that pursuit nor did he enjoy it. He then turned to teaching, and taught math in Painesville, Ohio. During these years his son Robert (Bobby) and daughter Jessica were born. In 1990, Shaffer moved his family west where they joined his brother John and his family who resided in Truckee, Calif. Within a few years, Shaffer was hired by the Tahoe-Truckee Unified School District as a math teacher. During this time, he also welcomed sons Vincent and Patrick into his life. It didn't take long before Shaffer took on duties coaching football and track & field. He also served as the school's athletic director for a number of years. At the time of his death, Shaffer was still teaching physical education and weight lifting classes at Truckee High School (THS). Shaffer is best known and widely admired for his illustrious career as an inspirational and highly successful Truckee High Wolverines varsity football coach, a position he held for 18 years. Under his leadership, THS won nine state championships. His players played their hearts out for him and his teams never missed the Nevada State playoffs. Shaffer retired from coaching football in 2013 and was inducted into the NIAA Hall of Fame the following year. Bob Shaffer was preceded in death by his mother Esther Belle Shaffer and his daughter Mary Lisa Shaffer. He is survived by his beloved wife Lisa Shaffer of Loyalton, Calif., son Robert (Bobby) and wife Allison and grandson Drake Shaffer of Truckee, daughter Jessica Dias and grandson Jackson and granddaughters Casey and Ashley Dias of Portola, Calif., son Vincent Shaffer and fiancé Erica Williams and grandson Elias Finch of Reno, Nev., and son Patrick Shaffer of Loyalton. He is also survived by his father Robert J. Shaffer of Warren, Ohio, sister Iris Tonty of Sharon, Penn., sister Patricia and husband Carl Martinec of Cortland, Ohio, sister Judy and husband Bob Stefan of Champion, Ohio, brother Mark and wife Sheri Shaffer of Kinsman, Ohio, sister Mary Beth and husband Jeff Millard of Farmdale, Ohio, brother James and his wife Anita Shaffer of Warren, Ohio, brother John and his wife Kathryn (Katie) Shaffer of Sierraville, Calif., sister Barbara Gonzc and fiancé John Baciu of Sharpsville, Penn., brother John and his wife Geri Ballano of Roscoe, Ill., brother Paul Shaffer and his fiancé Kathy Love of Cortland, Ohio, brother Samuel (Chip) and wife Michelle Ballano of Rockton, Ill., sister Jeanne Thornton and her companion Jamie Hovance of Savannah, Ga., sister Mary Catherine and husband Bill Nahod of Cortland, Ohio, sister Lisa Reesman and fiancé TJ Houser of Savannah, Ga., along with dozens of nieces and nephews. He is also survived by his dear sister-in-law Danielle (Tobie) and her husband David Foskie of Cortland, Ohio. Shaffer built a home and moved to Loyalton six years ago. He likely has taken his favorite past times enjoyed there which included riding his horses, walking his dog, tending to his green beans and strawberries and mowing acres of grass wherever he is now. A memorial service is planned for Saturday, May 6 at 1:30 p.m. (game time) at the THS Surprise Stadium in Truckee. In lieu of flowers, a Bob Shaffer Memorial Fund has been set up at Bank of the West in Truckee or visit GoFundMe.com/CoachShaffer.

Robert D. Shaffer passed away on Sat., April 1 due to injuries suffered in a head-on collision on Highway 89 south of Sierraville, Calif. He was 64. Born on March 1, 1953 in Greenville, Penn. to Robert and Esther Belle (Clark) Shaffer, he was... View Obituary & Service Information

The family of Robert D. Shaffer created this Life Tributes page to make it easy to share your memories.

Robert D. Shaffer passed away on Sat., April 1 due to injuries...