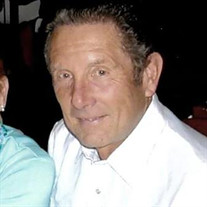 Truckee lost a beloved and True Local resident on New Years Day from complications of Pneumonia and of a Broken Heart from losing his wife Shirley of 49 years on Sept 3, 2019. He was surrounded with love by his daughter Debi and close friends Shirley Reynolds, Judy Arellano and Armando Ramirez with whom he had an amazing bond. Tom was born a proud Swiss. He was raised on a farm in Manteca, CA. Where he learned the importance of a hard days work and the love of heavy equipment which began at an early age. He arrived in Truckee on June 17, 1957 at 4:30 pm. He worked first as a logger and then joined the local construction Union to help construct what is now Interstate 80 which runs through Truckee and to the summit. He went on to become "The Best Snow Plower that Truckee ever had!" People were always in awe of his legendary snow hill ramp at Village Green. He was appropriately given the nickname "Tomcat" by family and friends. Tom was a role model and mentor, instilling his work ethic and wisdom not only to his daughter Debi but to so many. He could be tough. He demanded and expected that you do your best. But he was also funny, kind, generous. There were so many late nights that he would get out of bed because someone needed his help. Not too many people saw the soft side of him. The man that would rub his wife's feet at night to help her sleep, his love of a fried egg sandwich, the comic "Pickles" or his love of sweets, especially apple pie. The nurses in ICU said it would be 4:00am and he would be asking for the apple pie that I brought in. It was the only thing he wanted to eat in his final days. He is survived by his loving daughter Debi Chaffey, (Rich) and his sisters Elizabeth Neiderberger and Louise Inderbitzen. He leaves not only his loving family but also the many friends that he made along his incredible life's journey, especially Shirley Reynolds, Susan Mckinnish (Suzy Q His 2nd daughter) Armando Ramirez, Judy Arellano, Stacy Russell, Ann and Gary Gromer, Phil, Debbie and Aaron Eby, Erin Prado, Mike and Sean Huberty, Bill Welsh, Frank Hass, Shirley and Eugene Gini. May you and Mom rest peacefully now that you are together again. I love and miss you both! Services will be held January 25, 2019 at the Assumption of the Blessed Virgin Mary in Truckee. Viewing - 10:00 am Rosary - 10:30 am Mass - 11:00 am In lieu of Flowers please make a contribution to the MS Society or to your favorite charity

Truckee lost a beloved and True Local resident on New Years Day from complications of Pneumonia and of a Broken Heart from losing his wife Shirley of 49 years on Sept 3, 2019. He was surrounded with love by his daughter Debi and close friends... View Obituary & Service Information

The family of Thomas Inderbitzen created this Life Tributes page to make it easy to share your memories.