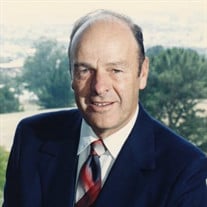 Walter James Smith, 91, passed away in Reno, Nevada on May 1, 2017. Jim was born October 25, 1925 in Los Angeles, California to Ejnar and Evelyn Smith and was the eldest of three children. He spent his early years in El Segundo, California, graduating from high school there in June of 1943. Upon graduation, he enlisted in the US Navy and served in the Pacific theater during World War II. In January of 1949, he married Barbara Ann Chaffin. Jim and Barbara settled in their first apartment in Berkeley before moving to Kensington, California in 1950. In 1964, they moved to El Cerrito, California where they lived until 2013 when they moved to Sparks, Nevada. Together they had three children: Patty, Diane, and David. Jim attended the University of California at Berkeley and graduated with a BS in Accounting. He worked for what was then Standard Oil in Richmond and in 1957 he transferred to Chevron International in San Francisco where he worked until his retirement in 1985. After retirement, Jim was very active at his beloved Mira Vista Golf and Country Club in El Cerrito. He was an avid golfer and played as often as he could. Jim would walk the hilly course at Mira Vista as often as four times a week and did so well into his eighties! Of particular joy to him were those occasions when his golf score equaled his age and that happened several times! Off the course, he served on Mira Vista’s board of directors from 1988 to 1993 and as the club’s president in 1990. Jim and Barbara loved to travel. They would often take golf vacations to locations in the United States, Canada, and later to Mexico. Then they discovered cruising! In recent years they cruised the Caribbean, the Mediterranean, and the the seas of Southeast Asia, Australia and New Zealand, and Northern Europe. It was these trips they enjoyed most in their later years. They also had a vacation home at Donner Lake, California and spent summers there fishing and golfing. Jim is survived by his wife, Barbara; his three children, Patty Engelen and her husband Rich of Reno, NV; Diane White and her husband Charlie of Truckee, CA; and David Smith and his wife Carla of Rocklin, CA. He leaves behind four grandchildren: Michael Engelen of Bristow, VA; Christine Engelen of Fort Collins, CO; Adam Pressler-Smith of Oakley, CA; and Chris White of Truckee, CA, along with three great-grandchildren. He is also survived by his sister, Geraldine Wheeler of San Diego and brother, William Smith of Gardnerville, NV. A graveside service will be held on Friday, May 12 at 1:00 p.m. at the Truckee Cemetery, 10370 Jibboom Street, Truckee, CA. In lieu of flowers, please make a contribution in Jim’s memory to a favorite charity. A reception will follow the service.

Walter James Smith, 91, passed away in Reno, Nevada on May 1, 2017. Jim was born October 25, 1925 in Los Angeles, California to Ejnar and Evelyn Smith and was the eldest of three children. He spent his early years in El Segundo, California,... View Obituary & Service Information

The family of Mr. Walter James Smith created this Life Tributes page to make it easy to share your memories.