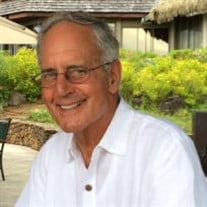 William David Brown passed away at his home on May 11. He was born on March 6, 1940 to Anna B. and James A. Brown in Oakland, California, a third generation born in Oakland. He attended elementary and his first two years of high school in Orinda after which time his family moved to Salinas where he finished high school, graduating in 1958. During his middle and early high school years, David was active in Boy Scouts, attending national jamborees in Southern California and Niagara Falls and a world jamboree in England. He also attended Philmont Scout ranch in New Mexico for six weeks, one of the places where he developed his love of hiking and the out of doors. In 1953 at age 13 he received the Scoutmaster’s Award as the outstanding Scout of the Year. He earned his Eagle Scout award in 1955 and was a Life Member of the National Eagle Scout Association. Through scouting, being an acolyte at his church, serving as class president twice, and playing football on a championship team, he learned multiple leadership skills which he employed throughout his life: the skills of listening, responsibility, reliability, honesty, integrity, trustworthiness, and loyalty. He attended Cal Poly, San Luis Obispo, where he received a BS in Political Science. At the end of his high school senior year he enlisted in the Army and during that summer and fall he completed his military basic training where he was chosen as a squadron leader. He entered Cal Poly winter quarter, and following graduation in 1962, he worked for his father in the irrigation business for a short period before deciding that he wanted to live in the mountains he loved at Tahoe, believing that there he would find his career. And find his career he did! He earned a real estate license and was hired as one of the original five salesmen at Northstar in 1971, a time when Northstar was considered “Everything in the Middle of Nowhere” with dirt roads. He worked for the company for several years, got his Broker’s license, and then developed an office of his own at the entrance to Northstar: David Brown Real Estate. Eventually he took in a partner, Kevin Sheridan, and they became Brown Sheridan Real Estate. He was selected to be the marketing broker for Northstar’s Big Springs phases 1-4 at which time Northstar took a giant leap forward in housing architectural design and construction. He retired from real estate in 2012 and spent several years traveling with his wife, hiking with the Trampers, serving as a board member of the Truckee Donner Land Trust, playing golf, and visiting friends and grandkids. As a child he often vacationed in the mountains where he developed a love of fly fishing and hiking and he always found comfort and solace when he was on the trail, surrounded by the beauty of Tahoe. David is survived by his loving and devoted wife of 42 years, Linda; son Stephen (wife Dawn), grandchildren Bradley, Natalie, Jonathan and Christopher; sisters Patty, Vicki (husband Gordon), and Kathy; his mother Ann; and nieces Annie and Heidi, nephews Jimmy and Jeff and their families. A Celebration of David’s life will be held on Thursday, May 21 at 2 p.m. at Village Church in Incline Village, NV, located just off the Mount Rose Highway 431, Pastor Jeff Ogden presiding. In place of providing time for people to speak of their personal experiences with David, people are encouraged to think of a story of remembrance or lessons learned from David and to write their thoughts on cards which will be provided at the service. People may also choose to bring cards of remembrance of their own. In lieu of flowers, memorial gifts in David’s name may be made to the Truckee Donner Land Trust, PO Box 8816, Truckee, CA 96162; the Humane Society of Truckee Donner, 10961 Stevens Lane, Truckee, CA 96161; or Nevada Area Council, Boy Scouts of America, 500 Double Eagle Court, Reno, NV 89521.

William David Brown passed away at his home on May 11. He was born on March 6, 1940 to Anna B. and James A. Brown in Oakland, California, a third generation born in Oakland. He attended elementary and his first two years of high school in Orinda... View Obituary & Service Information

The family of David Brown created this Life Tributes page to make it easy to share your memories.

William David Brown passed away at his home on May 11. He was...