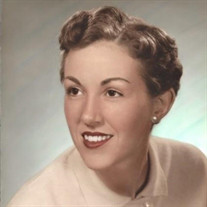 Winora Corinne Goyer Painter died February 13, 2022, at the age of 89. The glioblastoma cancer that took her life was diagnosed just four months ago. Winnie, or “Win” as her siblings called her, was the 6th of 14 children born to Ovila Joseph Goyer and Auleen Mary Levasseur Goyer. She was born January 21, 1933, at her parents’ working farm on the wind-swept prairie near Arborfield, Saskatchewan, Canada. In her closely-knit French-Canadian community, she grew up speaking both French and English. There were plenty of uncles, aunts and cousins living nearby and she had nearly 30 first cousins scattered across Canada and Michigan. At age nineteen, Winnie moved four hours away to the mining town of Flin Flon, Manitoba, where she worked at various jobs: in the local hospital, a diner called Emma’s Place, and then Milt’s Sweet Shop - another diner well-known for their delicious cinnamon rolls. Flin Flon offered steady work that was well away from the farm; “No cows to milk in Flin Flon!” And she met a whole new group of girlfriends that later led to a move to St. Boniface, Manitoba where Winnie landed a job at the newly opened Woolworth store. She spent many hours managing the lampshade counter. In 1958 she followed her sisters Doris and Angie to Oxnard in Southern California, where they were already working as nurses. Winnie got a job right away at Oxnard’s Woolworth store. Over time the three sisters met three American sailors who each eventually married. The sailors were all buddies aboard the USS Norton Sound. Other buddies wanted to know if “there was another Goyer sister.” It was a blind date that introduced Winnie to her future husband James Howard Painter. Winnie always giggled when she described their first encounter. After a relatively short period of time being together in Southern California, “Red” was transferred to the USS Shangri-La in Florida. Then, in the age before cell phones and the internet, their courtship continued the slow way…by letter. After knowing her for just three days, Red was sure that he wanted to marry Winnie; she said it took her “a bit longer” to reach the same conclusion. On June 10, 1961, Winnie and Red married. After a honeymoon trip to visit her family in Arborfield Canada, she began a whole new life as a Navy wife. Over the next ten years, Jim’s Navy career took them to: Pensacola, Florida; Adak, Alaska; and Seattle. In 1968, Winnie lived in Truckee with Jim’s parents, Carl and Lizzie Painter, while he was stationed on a hospital ship off the coast of Viet Nam. When Jim retired in 1971, they moved to Truckee and built a home. The next decades were filled with square dancing (Jim’s love), new jobs (Winnie retired from the Tahoe Truckee Unified School District in 1995), and family reunions in Canada (Winnie was lucky enough to attend all of them) interspersed with nieces and nephews getting married and starting their own families. Family was always welcome at Jim and Winnie’s home in Truckee. Keeping track of everyone was a full-time job. Jim’s death in 2002 due to ALS opened a new, different chapter in her life. This one was filled with: winters spent with her sisters in Florida; trips with family (Disneyland, Hawaii, and France); visits to family in Canada, and a renewed focus on her 50-year affiliation with her Truckee parish. She was a long-time member of the Ladies Guild and supported their fund-raising activities with homemade jam and needlework items (she crocheted beautiful Christmas angels), for a long time she helped count donations after weekend services, and for the last decade put her crochet skills to work with the parish’s Prayer Shawl Ministry; ultimately donating over 62 items, primarily lap blankets. Those blankets have helped people in Truckee and as far away as Canada, France, Mexico, and South America. Even after her diagnosis, Winnie kept up her crocheting and completed 5 baby blankets. While her family took first place in her heart, she also loved ’68 mustangs, good Canadian whisky, scotch mints, lobster, country western music, Starbucks peppermint mochas and mocha frappuchinos, saddles shoes, poodles and her canine nieces and nephews, kettle corn, rodeos (bull riding was her favorite event), chocolate (Snickers or Sees, please), good Mexican food served with a Jose Cuervo Gold margarita, and potatoes from her beloved Saskatchewan. And chocolate; lots of chocolate. Winnie was preceded in death by her husband of 40 years (Jim), parents (Ovila and Auleen), in-laws (Carl and Lizzie Painter) and four siblings (Leslie Goyer, Doris Goyer Ballard, Angelina Goyer DeShong and Martin Goyer.) She is survived by nine sisters and brothers all living in Canada; (sisters: Vivian Goyer Giselman, Lea Goyer Edwards, Jeanette Goyer Pavelich, Cecile Goyer, and brothers: Clement, Daniel, Adrien, Allan, and Ronald). And more than 40 nephews and nieces. A memorial mass is scheduled for Saturday, May 14 at 11:00 at Assumption of the Blessed Virgin Mary Catholic Church (10930 Alder Drive in Truckee) with burial to follow in Sierra Mountains Cemetery in Truckee. Details for a reception will be announced closer to the date. Our family would like to thank the excellent Tahoe Forest Home Health caregivers who assisted Winnie during this phase of her life, as well as the team of ladies who had recently committed their time and energy to help Winnie fulfill her wish of continuing to live in her home. We couldn’t have made that wish become a reality without your support. Donations in Winnie’s memory may be made to the parish shawl ministry (checks made out to Ron Painter, P O Box 359, Colfax, CA 95713) or use her personalized page to donate to the Tahoe Forest Health System Foundation. https://secure.acceptiva.com/?cst=iTACYg

Winora Corinne Goyer Painter died February 13, 2022, at the age of 89. The glioblastoma cancer that took her life was diagnosed just four months ago. Winnie, or &#8220;Win&#8221; as her siblings called her, was the 6th of 14 children born... View Obituary & Service Information

The family of Winora Corinne Goyer Painter created this Life Tributes page to make it easy to share your memories.